Sometimes it is who you know, but it also may be where you live, that determines whether you live or die. Despite huge advances in the treatment of cardiac arrest, survival to discharge from the hospital ranges from 8.1% in Seattle, WA to just 1.1% in Alabama and everything in between.[1]  In a recent book, Erasing Death, Samuel Parnia, MD Samuel Parnia, MD survival rates as high as 75% have been documented in a New York hospital when this particular physician is on duty.[2]   Could it be dumb luck or could it be that the treatment protocols for emergency medical services are different in every state? And could it be that each and every physician can treat cardiac arrest according to his/her beliefs instead of a standardized protocol??

An example is a use of an ECMO which is widely used in Southeast Asia (especially South Korea and Japan) which has increased resuscitation rates to 70–90 percent vs 20–50 percent, in best case scenario in the United States.[2] Although the machine is widely available in the United States there is no standardized protocol for its use. Could it be expensive, or simply preference of practice? There is no standard not only from State to State but from hospital to hospital and physician to physician. Despite mounds of science and research, each and every physician has the right to ignore it, allow it to change his/her practice, adopt some but not all, or anything in between.

The first case in Erasing Death documents the case of a taxi driver who was resuscitated and discharged home neuro-intact after over 40 minutes of resuscitation. A few things lined up in his favor. The right physician was on duty (most would have stopped at the AHA recommended 30 minutes), he ended up at a hospital that utilizes automated compression devices (able to better maintain coronary perfusion pressure), and a hospital that aggressively utilizes hypothermia to maintain neurological function. If any one of these had not been in place, statistics show that this patient would have died. Yet few hospitals have all, many have some, and still, many more have none of the above. And there are no requirements that they do have this technology available.

Something as simple as how many compressions are done or how much electricity is used for defibrillation differ from state to state because of emergency medical services protocols under which EMTs and paramedics function. They are different from state to state. Although training is being standardized via NREMT, practice is not even close behind. The practice is determined by protocol and individual physician which may differ from shift to shift.

I was teaching a paramedic course this particular evening — a very simple module called the “Treatment of Ventricular Fibrillation”. It sounded something like this: Immediately upon arrival, while getting the defibrillator ready, complete 2 minutes of CPR at a rate of 30:2. Be aware that this is what you need to know from the book to pass the test, however next week when we do ACLS you will defibrillate immediately when the defibrillator becomes available. Take a look at the PA protocols though. They just changed, so when you actually are in the field you will be doing 200 compressions (Pit Stop) without stopping for ventilation or defibrillation. For testing purposes, you will defibrillate at 200 joules, but for ACLS you will use the manufacturer’s guidelines which differ by the brand of the machine. When using PA protocols you will always use 360. Good News! Everyone gets Epinephrine 1 mg every 3–5 minutes. Now for testing purposes, amiodarone is given at this point. However, when actually functioning in the field in PA, Amiodarone is only given for RECURRENT ventricular fibrillation, that is if you fix it and it comes back, but if the physician tells you to follow ACLS guidelines then everyone gets Amiodarone 300mg IV if they do not come out of ventricular fibrillation. It doesn’t matter anyway because by the time you figure it out the AHA recommended 30 minutes is up and you can quit……..that is unless you have read the science lately to discover that people are walking out of the hospital after being in cardiac arrest much longer. 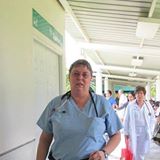 Judith Haluka has worked as an EMT, cardiovascular technologist, and Disaster Medical Assistance Team for the Department of Homeland Security.