COVID-19 Update: Because some with COVID-19 can present with similar symptoms to Dengue, an incorrect diagnosis may cause a delay in care in areas where Dengue is endemic. A rash, aches, nausea or vomiting, and fever are all symptoms of both conditions.

Dengue is a re-emerging public health concern with two-fifths of the world population being at risk of infection. It is a mosquito-borne viral infection primarily transmitted by the bite of an infected female of the species Aedes aegypti (figure 1) and the species Aedes albopictus_.

There are five serotypes of the dengue virus: DENV-1, DENV-2, DENV-3, DENV-4, and DENV-5. A person infected by one of the serotypes is immune for life against that specific strain but is not protected against the other four serotypes.

Transmission of the Dengue virus

Mosquitoes are necessary for transmitting the virus—it cannot be spread directly from person to person. A mosquito that transmits the virus is known as a vector, or carrier, of the disease.

However, not all mosquitoes spread dengue, only those who have previously bitten an infected person (figure 2). Once a mosquito becomes infected, it remains infected and can continue to spread the virus throughout the entirety of its life, which is roughly 3–4 weeks.

There are two periods of interest in humans when it comes to transmission: the incubation period, which marks the onset of symptoms, and the latency period, the period between infection and when the person can spread the disease.

The incubation period (4–10 days) provides a rough estimate of the latency period, as most individuals have been noted to become infectious within 24 hours pre or post the onset of symptoms. Once infectious, a person can transmit the infection, via the Aedes mosquitoes, for 4–5 days (with a maximum of up to 12 days).

After the initial incubation period, those who have become infected by the dengue virus may either be asymptomatic or go through three forms of the disease:

The Centers for Disease Control and Prevention (CDC) (2019), noted that up to 75 % of all DENV infections are asymptomatic, that is, they have no clinical signs or symptoms of the disease.

Symptomatic dengue commonly presents as a non-specific, mild to moderate, acute, febrile illness; however, as many as 5 % of dengue infections progress to severe, life-threatening disease—Dengue Hemorrhagic Fever (DHF) and Dengue Shock Syndrome (DSS).

Severe forms typically manifest after a 2–7 day febrile phase and are often preceded by warning signs. 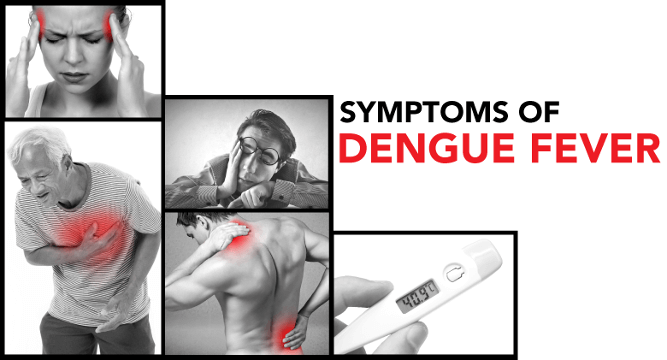 Because early clinical findings are non-specific, knowing how to recognize the warning signs of severe infection can reduce the risk of death among patients with severe dengue.

Undifferentiated fever can mimic any other acute illnesses with fever—it does not meet the case definition criteria for dengue fever. It’s difficult to diagnose based on a physical exam and routine tests alone. Unless a specific dengue diagnostic test is performed, the diagnosis remains unknown.

Dengue fever with or without hemorrhage

Dengue fever is the most common and less severe form of the virus. It begins with a sudden onset of a high fever that usually lasts between 3–5 days, and is accompanied by the following symptoms:

The third clinical presentation is DHF, which may progress to DSS. Early symptoms of dengue hemorrhagic fever are similar to those of dengue fever, but 5–7 days after initial onset, the symptoms worsen and may include:

The most severe progression of dengue is dengue hemorrhagic shock, also known as dengue shock syndrome. It is characterized by severe low blood pressure caused by hypovolemia, or low blood volume, in relation to severe dehydration and circulatory failure.

During shock, one’s temperature drops, which may fool some into believing that the person is recovering, when this is the critical period when caregivers should be most vigilant. Without immediate and appropriate supportive care, the mortality rate is above 20%. However, this is not the most common scenario. Many seek health care during DHF.

The CDC illustrates the three phases of the DHF infection in figure 3, which include:

Dengue is a disease that has spread over time. It is currently present in 128 countries and mostly found in tropical and subtropical areas around the world (figure 4). In the last 4–5 decades, the incidence of dengue in the world has increased significantly.

Dengue cases are underreported and many cases are misclassified.

It is estimated that 390 million dengue infections occur every year, of which 96 million have clinically manifested. Each year, about 500,000 people clinically progress to severe dengue; a large proportion of these cases are children.

About 2.5 % of all cases result in fatality. 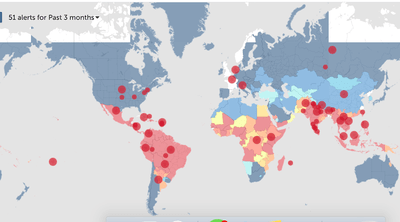 Are you planning to travel to central or South America? Asia? Africa?

Before traveling to areas where dengue is endemic, it is important to take certain precautions:

Between late 2015 and early 2016, the use of the first vaccine against dengue, Dengvaxia (CYD-TDV), or Chimerivax, was approved in several countries for people aged 9–45 years living in endemic areas. Discovery of DENV-5 and other similar strains in the future may further impede the Dengue Vaccine Initiative.

According to its manufacturer, the vaccine should ONLY be given to those with a prior laboratory confirmed Dengue infection. If they have not had one, they are at risk of developing a severe version of the disease.

The vaccine is now approved in the U.S. for children between 9 and 16 years old living in endemic areas (American Samoa, U.S. Virgin Islands, Puerto Rico). It is given in three doses, each six months apart.

There are other live-attenuated vaccines that are currently in developmental phases and clinical trials. At present, the WHO is only recommending the dengue vaccine in areas where data signals a high burden of disease.

What happens if I get sick with Dengue during my trip?

If dengue is suspected, you must visit a doctor within the region you are visiting as soon as possible.

Currently, there is no specific treatment for dengue, but early detection and medical care lowers fatality rates below 1 %.

Liquids, oral and intravenous, are supplied to prevent dehydration, and acetaminophen is used to treat high fever. It is crucial to avoid taking aspirin, ibuprofen, or naproxen as these can increase bleeding problems.

The condition usually lasts a week or more and is normally not deadly.

If you become sick during your trip, you should consider extending your stay until you recover completely.

If you develop dengue-related symptoms, it is important that you visit your doctor to rule out infection by dengue. You can confuse the symptoms with an acute illness or the flu, but remember that if you are coming from an area where dengue is endemic, it is possible that these symptoms may indicate the presence of dengue. However, do not worry, with appropriate care, rest and hydration, you can recover within a matter of a few days. 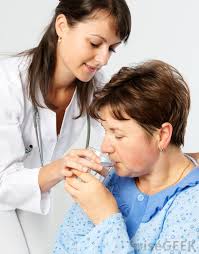 ACLS prepares providers to deliver lifesaving care and identify any disease process through a routine pattern of care. The H’s & T’s are an essential part of ACLS that remind healthcare providers to look for the reversible causes of cardiac arrest. While ACLS will save lives, Dengue Fever is a possible, albeit rare, toxin to consider.

Last reviewed and updated by Caitlin Goodwin on Feb 7, 2021

Caitlin Goodwin MSN, CNM is a board-certified Advanced Practice Registered Nurse with more than 12 years of experience as a nurse. She currently works as a Certified Nurse-Midwife for the Cleveland Clinic.