Oxygen makes up about 65% of the mass of the adult body—most of this is in the form of water. 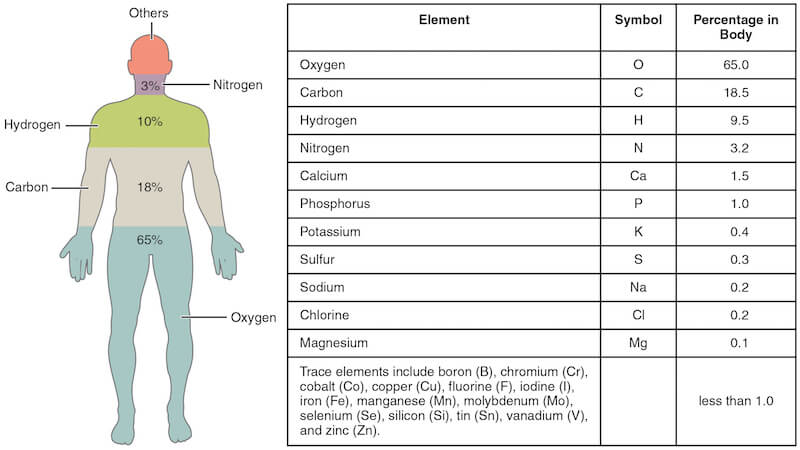 Oxygen also makes up approximately 50% of the mass of the Earth’s crust and 21% of the atmosphere (air) — the rest of the atmosphere is mostly nitrogen (78%). The Earth is the only planet in the solar system with a high percentage of oxygen.

Oxygen is critical for chemical reactions that keep the body alive, including the reactions that produce adenosine triphosphate (ATP) — one of the compounds used in energy production. Brain cells are sensitive to a lack of oxygen because of their demand for a high and steady production of ATP.

Brain damage is likely within five minutes without oxygen (cerebral hypoxia), and death is likely within ten minutes. A steady supply of oxygen is essential for cardiac function and viability.

According to the US national library of medicine open chemistry database:

An adult human, at rest, inhales 1.8 to 2.4 grams of oxygen per minute. This amounts to more than 6 billion tonnes of oxygen inhaled by humanity each year.

The molecular formula for oxygen is O2, which represents the chemical bonding of two oxygen atoms.

Dioxygen is the physical form, or allotrope, of oxygen that surrounds us. Our atmosphere also contains trioxygen known as ozone (O3) — this allotrope is highly reactive and damages lung tissue.

Oxygen is more water-soluble than nitrogen which is why, water contains more oxygen than would be expected from the nitrogen-rich atmosphere.

Water (H2O) is the most prominent and well-known oxygen compound. Oxygen is electronegative which means that it can bond with almost every other element. Some of these bond-forming reactions can only occur at elevated temperatures.

Naturally occurring oxygen has three stable isotopes: 16O, 17O, and 18O. The most abundant isotope is 16O and is mostly synthesized in massive stars after the hydrogen fusion process. After hydrogen and helium, oxygen is the third most abundant element in the universe.

The biogeochemical cycle of oxygen occurs within three main reservoirs: the atmosphere, the biosphere (all life on this planet), and the Earth’s crust.

Plants are the primary creators of atmospheric oxygen through the process of photosynthesis. In the diagram of the oxygen cycle below, you can see how oxygen is used and cycled by plants.

Photosynthesis in plants (By Ahmed Raza)

The cycling of carbon and oxygen is interconnected. Plants use carbon dioxide (CO2) and sunlight to synthesize and release energy and oxygen. Humans and animals breathe in oxygen and then breathe out carbon dioxide — plants then use this carbon dioxide to restart the perpetual cycle.

Processes that use oxygen

Breathing — During respiration, air passes through the bronchial tubes, or airways, into the lungs for gas exchange, or diffusion to take place — the exhalation of CO2 makes room for the absorption of O2.

Decomposing — When animals and plants die, they decompose — this process uses up O2 and releases CO2.

Rusting — This is also known as oxidation—when things rust they use up O2.

Combustion — Three things are necessary for fire: oxygen, fuel, and heat. When things burn, they use O2 and release CO2. Contrary to popular belief, oxygen is not explosive; nevertheless, patient education is imperative because oxygen accelerates combustion.

Sunlight — Some production of O2 occurs when sunlight reacts with water vapor in the atmosphere.

Since the start of the Industrial Revolution, humans have increased the co2, concentration in the atmosphere through activities including cutting down trees, intensive land use, and by burning fossil fuels.

NASA states that, “this [increase of CO2] is the most important long-lived “forcing” of climate change.” Carbon dioxide stays in the atmosphere for thousands of years.

Each person has a “carbon footprint”, meaning the amount of greenhouse gases directly and indirectly emitted by an individual throughout their life

Go carbon neutral — This is offsetting enough CO2 to neutralize the amount of pollution people and businesses are responsible for. This is the current approach taken by most carbon-conscious people and businesses though whilst it is a good start, it does not tackle the root of the problem.

Go carbon negative — Acting to remove more CO2 from the atmosphere than a person is responsible for producing is a much more effective approach. Individuals and companies can invest in renewable energy generation or other carbon emission reduction projects, such as planting trees to become carbon negative.

The impact of human behavior on the delicate balance of the ecosystem cannot be overstated. We have acted with such reckless abandon for so long now that we have actually had a serious negative effect on Earth’s natural systems. Humans have a responsibility to understand their own personal contribution to this balance, particularly those involved in industry and big business.

Philo of Byzantium, a Greek writer and engineer in the second century, conducted the first experiment of the relationship between air and combustion. He found that if you take a burning candle on a dish full of water and invert a cylindrical container over it, the surrounding water will rise into the neck of the vessel.

The first description of the substance now we call oxygen was in 1600s by the Polish alchemist Sedziwoj.This discovery was not widely known, and Oxygen was independently rediscovered by Scheele, then Priestly in the 1770s.

Later, the French chemist Lavoisier renamed the compound oxygen because of its ability to form acids. The term oxygen comes from the Greek word “oxygenes” meaning “acid producer.”

In the nineteenth century, scientists realized that they could liquefy oxygen by compression and cooling. By 1891, scientists could produce enough liquid oxygen for research. Four years later, the first process to generate liquid oxygen was commercially viable.

Industrial use of oxygen

More than 50% of the world’s steel production uses the basic oxygen process (BOP), which employs pure oxygen to convert scrap metal and iron into steel.

Other applications of oxygen in the industrial setting include making or processing new compounds such as plastics, paper, glass, ceramics, pharmaceuticals, and petroleum.

Medicinal use of oxygen

Oxygen has various uses in health care—treatment is flexible enough for use in inpatient, outpatient, and emergency settings. It can help treat ailments such as heart disorders, pneumonia, and chronic obstructive pulmonary disease (COPD).

The pulmonary circulation introduces oxygen into the systemic circulatory system. Oxygen treatment not only increases the oxygen saturation of the blood but also can ease cardiac workload.

When providing life support, airway care and rescue breaths improve a person’s chance for survival, as in this life-saving story. Other life support use includes oxygen supplementation for astronauts and scuba divers.

Ozone is a reliable agent for water sterilization as it has a proven record of destroying pathogens. Because of its ability to kill pathogens, medical O3 is purported to treat numerous pathogenic diseases. Applications vary, and include intravenous infusion, rectal insufflation, and topical use.

The Food and drug administration states:

Ozone is a toxic gas with no known useful medical application in specific, adjunctive, or preventive therapy. In order for ozone to be effective as a germicide, it must be present in a concentration far greater than that which can be safely tolerated by man and animals.

Oxygen has also found its way into recreational use. Oxygen bars offer oxygen exposure that is higher than normal, for a fee. It is touted to produce mildly euphoric experiences; however, research doesn’t back this claim.

At elevated partial pressures for prolonged periods of time, oxygen can be very toxic; it can cause convulsions and many other health problems. Contact with liquid oxygen can cause skin and eye irritation as well as burns and frostbite. In the early to mid-1900s, it was a common therapy to place premature babies in incubators with a high percentage of oxygen; this ceased when a correlation was found between this practice and a blindness called retinopathy of prematurity (ROP). 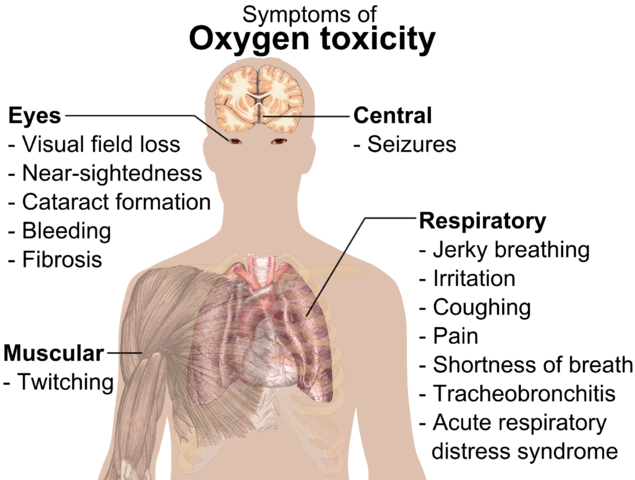 Oxygen supplementation improves the prognosis in the majority of patients admitted to intensive care units; however, a lack of careful oxygen management may place patients at risk for hyperoxia (excess supply of oxygen).

Hyperoxemia—too much of a good thing?

Hyperventilation is rapid and deep breathing that creates a low level of CO2 in the blood. An individual may hyperventilate in an emotional state, such as anxiety, or from a medical condition such as infection or bleeding. Furthermore, a hyperventilation response can occur in someone when adjusting from a low to a high altitude—the individual’s rate and depth of ventilation increase to compensate for the reduction in the partial pressure of oxygen.

Respiratory depression, or hypoventilation, causes an increase in the concentration of CO2 in the blood. Hypoventilation is not the same as respiratory arrest, in which breathing stops entirely, and death occurs due to complete anoxia (complete oxygen deprivation), although both are medical emergencies. Hypoventilation can be a precursor to hypoxia.

What Is obesity hypoventilation syndrome?

Oxygen is like any other prescription drug; its beneficial effects must be balanced against its adverse effects. No drug or supplement is completely without risks.