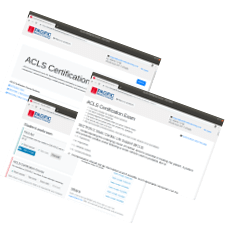 Physicians: We are accepted by the OH Board of Medicine because we are accredited by AMA (category 1)

Nurses: We are accepted by the OH Board of Nursing because we are ANCC accredited

A CE activity approved or provided by a nationally recognized accreditation system of CE, for example, the American Nurses Credentialing Center (ANCC), the Accreditation Council for Continuing Medical Education (ACCME),

Pharmacists: We are accepted by the OH Board of Pharmacy

If you prefer sit-down, in-person training for ACLS, we have you covered.

To schedule a session, please see our in-person scheduling page.

Here's a few stories that warmed our heart. Just sharing and thanking you for choosing a career that helps people that need it most.

After a 13-year-old Sydney Ridlehoover finished her chores, she convinced her parents to take her and her friend to the mall. once they arrived, the girls went out of the car and walked while laughing and talking. Upon walking, her stepfather Peter saw Sydney fall before entering the mall. He thought that she is just joking, but Tracy her mother and her stepfather noticed that she did not get up. They rushed to her side, she was shaking and having difficulty breathing sounds. her mother thought she was just having a seizure and screamed for help while her stepfather called 911. luckily, a respiratory therapist was nearby and went to Sydney's, she noticed that the girl is having a cardiac arrest and began doing CPR. Also, an off-duty EMT who passing by joined to rescue and ask for AED. And the ambulance arrived, At the hospital, they need to sedate her for her brain to rest. Sydney's doctor implanted a defibrillator to shock her heart if it goes into an irregular rhythm again.After cardiac arrest, the family bought AED and they keep it at home and bring it with when they travel and also the family underwent CPR training. Now, Sydney's life is back to normal at 15, and her new appreciation for CPR.

Jeff Wilson was playing pickleball with his friend and generally felt okay while running around the court when, at the end of the game, he felt dizzy and suddenly collapsed. Thanks to the quick action of his playing partner Dave Rice, Jeff was saved from dying of heart attack. Dave laid Jeff flat on the floor and immediately performed CPR and spent four to five minutes doing chest compressions until paramedics arrived on the scene and hit the victim twice with a defibrillator. The victim later learned that his two main arteries were both blocked with plaque, one 100% blocked and the other 80%.

Cops save 3 overdosed inmates with CPR

Three inmates were found almost dead at the Columbus penitentiary. It is believed the inmates were in the possession of drugs and became overdosed with the illicit substances. Guards managed to revive the 3 men thanks to CPR maneuvers and several doses of anti-overdose drugs. The guards are now performing a thorough investigation to avoid such thing happening again.

Child saved by family and dispatch

Jocelynn Alexander, a 911 dispatcher for Butler County, recieved a call from a mother stating that she has found her 4-year-old drowning in a pool. Alexander explained how to do CPR to the family, step by step, as carefully as possible. Within minutes, Alexander could hear the child crying in background. The 4-year-old as since recovered from the incident.

Assistant football coach George Woods was on his way to a game when he saw that there had been a car accident and stopped to see if there was anything he could do. He could see that a man had been pulled out of his vehicle and was not breathing. According to Woods, when he arrived someone else was doing CPR but they were doing it wrong. Woods took over and continued CPR until the paramedics arrived. The man has recovered and has been charged with driving under the influence.