Parkinson’s disease is a progressive nervous system disorder that affects movement. This neurodegenerative disorder affects cells in a specific area of the brain. According to the Centers for Disease Control and Prevention (CDC), the associated symptoms make Parkinson’s disease the 14th cause of death in the United States. 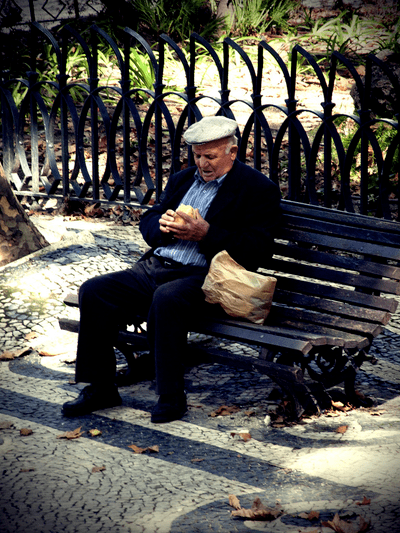 “Old Man of Lisboa” by kevinpoh is licensed under CC BY 2.0

The cause of Parkinson’s Disease is mostly unknown. Those with Parkinson’s have low dopamine concentrations in their brain.

Experts think that a combination of factors such as genetic mutations, lifestyle factors, and environmental effects cause the degenerative disorder. It is more likely to occur in men over the age of 60 years old. Chemicals like Trichloroethylene (TCEs) and Polychlorinated Biphenyls (PCBs) also increase the risk for Parkinson’s disease risk.

The symptoms of Parkinson’s disease vary depending on how far the disease has progressed. As the person with Parkinson’s advances along the spectrum, the disorder becomes worse. Symptoms are gradual and often start with a slight hand tremor.

Parkinson’s signs and symptoms include:

As the disease progresses, the following occurs as a result of the above symptoms:

There are five stages of Parkinson’s disease. Stage 1 means the symptoms are mild and may not even be diagnosed yet. In stage 2, the symptoms are more pronounced, but balance is not impaired. Those with stage 3 remain independent. Stage 4 can still stand unassisted but often have trouble walking and performing daily tasks. Stage 5 is the most advanced stage and requires around the clock care.

Diagnosing Parkinson’s disease may be challenging at first as the symptoms are mild at first. There is no specific test that diagnoses the illness. A neurologist, a doctor who specializes in nervous system conditions, will evaluate your case. If it is early in the process, a follow-up appointment may confirm worsening symptoms.

They will base their diagnosis on your medical history, signs, symptoms, and a neurological and physical exam. The neuro exam will cover mental status, balance, motor function, and a sensory exam. This will cover items like:

Other tests may be ordered, such as blood work or imaging like an MRI. However, instead of diagnosing Parkinson’s, it is to rule out other conditions causing these symptoms. In rare cases, you may receive a dopamine transporter scan (DaTscan) to support the suspicion of Parkinson’s. However, most people do not receive this expensive test. A skilled neurologist can obtain the same diagnosis based on their clinical experience, and it is not needed for the diagnosis.

There are many medical and surgical options for treatments for Parkinson’s, but no cure. Some medications will manage problems with walking, tremors, and movement by increasing dopamine. Dopamine cannot directly enter your brain. Your medication options include:

There is also a surgical procedure called deep brain stimulation, in which the surgeon implants electrodes into your brain that connect to a generator in your chest. The generator near your collarbone sends impulses to your brain to reduce symptoms. There are risks like infection, stroke, or bleeding. It is best for those with advanced Parkinson’s disease who have unstable responses to their drug regimen.

While the cornerstone of Parkinson’s disease is worsening symptoms, there are ways to reduce them as the disease advances. The most crucial part of the treatment plan is a supportive network, coping tools, and safety measures. Coping tools include meditation, tai chi, yoga, or seeing a trusted therapist.

If balance is becoming a problem, it is crucial to prepare the bathroom with grab bars and remove rugs. An occupational therapist can help with other strategies.

If you have questions surrounding performing CPR for those with dementia, Pacific ACLS provides courses and an article to give you a more in-depth look.

Caitlin Goodwin MSN, CNM is a board-certified Advanced Practice Registered Nurse with more than 12 years of experience as a nurse. She currently works as a Certified Nurse-Midwife for the Cleveland Clinic.